FREE SHIPPING ON ALL ORDERS $80 OR MORE!

Rat poisons are a topic of debate.  From dead owls in British Columbia, to the death of a beloved Great Dane in Texas, to home flippers in South Carolina with mysterious nosebleeds, to a mother bobcat dying on the UC Santa Barbara Campus, the unintended consequences of rodenticides are presenting in an ugly way and it’s affecting non-targeted wildlife. There is now a powerful alternative presented by the Weiser Group in the form of Nature’s Defense.  We sit down with accomplished wildlife biologist, Nathan Troyan, to discuss.

In most suburban and rural areas where real estate is growing, forests and forest corridors are being interrupted.

“These are called fragmented forests,” Troyan explains. “With the ever-growing expansion of man-made expenditures into rural areas, fragmented forests are disturbing habitats.  As it pertains to rodents, fragmentation reduces cover from predators. This causes mice, rats, and other rodents to find shelter and food elsewhere.  They are pushed right into the modern world – i.e. your home, garage, camper, boat, etc.”

Unintended Consequences for the Environment

“Beginning with the regulations surrounding DDT in the mid 19th century, the realization of the unintended consequences of industrialization has been a constantly evolving topic in the United States.  DDT entered the watershed and it began to bioaccumulate in fish. Populations of secondary predators or carnivores, such as Osprey, had taken a huge hit by consuming fish who had consumed DDT.  This lead to the Osprey laying their eggs with weakened egg shells.  The populations of many birds of prey took a serious hit,” Troyan continues.

This demonstrates the havoc that can be wrought by using poisons in the environment. Rat poisons are bringing this issue to light as the poisons are once again being recycled up the food chain.  Among those affected are not just birds as with DDT.  Domestic pets, wildlife and even children are seeing increases in tumors, birth defects as well as 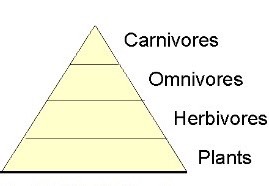 mortality rates as a result of the poisons. (1)  When the herbivores consume rat poison, the effect is felt up the ladder in the graphic to the left.  We are left with animals toxic levels of poison that are then consumed by the carnivorous predators.  The ecosystem is severely negatively impacted.

A study of 130 dead birds conducted in Vancouver, British Columbia, Canada revealed that “virtually 100%” of owls and majority of hawks had evidence of the anticoagulant rodenticide.  As the second generation of these rodenticides are becoming widespread, science is finding that they are even more susceptible to bioaccumulation than its predecessor. (2) the Canadian government is taking notice and pushing to ban the rodenticides in some capacities. A study in California, spurred by several infected deceased bobcats, revealed that “about 73 percent of 492 wild animals tested in California” had second-generation anticoagulants present in their bodies.  The wild animals tested included larger predators such as Mountain lion on down to the endangered San Joaquin kit foxes.(3)

Mark Weiser is the founder of the Weiser Group, LLC.  Weiser’s Nature’s Defense Mouse & Rat Repellent is fundamentally different from the rat poison options on the market. Weiser notes that there are 3 logistical issues that stem from the use of rat poisoning.

These three reasons led Weiser to develop his products.  A key difference between repellents and the attracting qualities of rat poisoning is just that.  Weiser’s repellents are designed to keep the rodents away all together rather than to bring them in at all.

If you are using poisons to treat a rodent issues, we highly recommend that you consult and do so through an authority or professional.  But to do-it-yourself while being safer, more effective, and considerate of the environment, Nature’s Defense Mouse and Rat repellent is recommended.